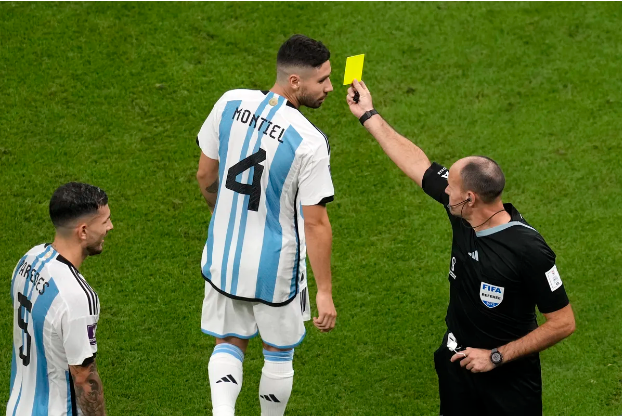 Marcos and Gonzalo are the two Argentine players who have been suspended owing to their yellow card accumulation and will not play in the semi-finals.

The competition level at the FIFA World Cup 2022 is increasing as the tournament nears its conclusion. Croatia presents a significant challenge for Lionel Messi and Argentina. The absence of Marcos Acuna and Gonzalo Montiel only serves to heighten the unease. Because of their high yellow card totals, both players have been suspended.

The Argentinians and the Croatian side, who will compete against one another in the next Croatia vs. Argentina semi-final match of the FIFA World Cup 2022, which will take place in Qatar, are both really pumped up and ready to go for the game. It has undoubtedly been a bundle of conflicting feelings and circumstances up to this point.

Both teams have currently competed in some of the most challenging World Cup matches that have been thrown at them. With the different games they have played up to now, there have been the usual and expected highs and lows. They have simply hung onto their particular positions and battled every single opposing team with all of their might, despite all of the difficulties.

In spite of this, both teams are in agreement that this World Cup semi-final battle will be unlike any other game they have previously played. Nobody on either team believes the game will be a cakewalk, not even for a second. They are aware of their opponent’s strengths and weaknesses. However, their adrenaline is being sustained by their unquenchable need to succeed.

The Croatian team is preparing for the match by coming up with a solid game plan and strategy in order to be able to counteract Lionel Messi’s natural style of play. They, for their part, are confident that, considering how they have been performing, if they pay close attention to Messi’s game, it will give them a better than even chance of winning. They are also aware that the two great players on the Argentinian side, Marcos Acuna and Gonzalo Montiel, have been suspended and will not be participating in the semi-final match.

How to Win the Best Gacor Online Poker Slot Gambling