Virat Kohli- all you need to know about his life! 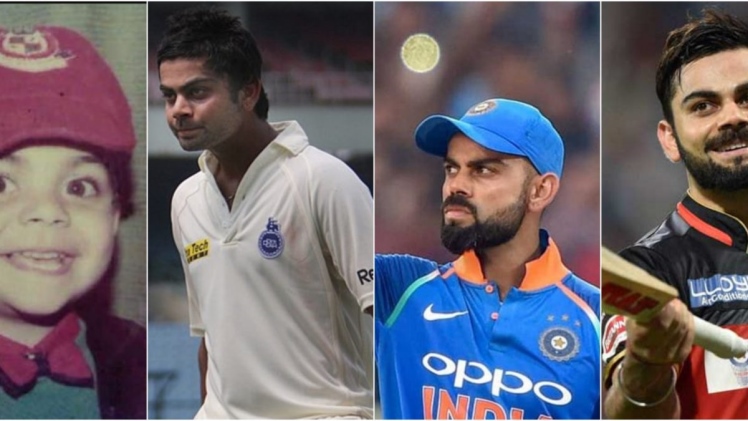 As we all know, the undisputed king of cricket in India is the one and only Virat Kohli, who has over 24015 runs throughout all T20, Test, and ODI forms in international cricket. Virat Kohli grew up in Paschim Vihar, Delhi, however, his present residence is at DLF Phase-1, Gurugram.

A sassy, chunky teenager with gelled hair became well-known after leading India to victory in the Under-19 World Cup in Kuala Lumpur in early 2008. Virat Kohli, with his most un-Indian, ‘bad-boy’ ferocity, would be an outlier in an Indian team packed with saint-like idols worthy of their biographies.

When Kohli first came onto the scene, he was a precocious talent with a cover drive to die for and the captain of an Under-19 world Cup-winning team. As the Tendulkar era started to come to a close, Kohli was bound to become India’s next prominent batsman, but he wanted to be more: a player who the opposition would be in awe of and whose presence would increase the intensity of the match.

He made sure he was healthy and strong enough to compete in every game while living every ball and experiencing every moment. He was generally recognized for transforming Indian cricket’s fitness culture by introducing endurance tests as a selection factor.

Simply put, Kohli was India’s strongest captain. He also happened to be in charge of the BCCI at a time when it was being managed by interim officials who knew better than to annoy Indian cricket’s most prominent figure. There was never any reason to question his motivation, which was to help India win games, which they did frequently under his leadership. Several bookies tried to approach him, but he is a gem of the person and a very honest player. A lot of cricket match fixing is happening these days, which has to be avoided.

Victor Kohli was born in a Punjabi family in Delhi on November 5, 1988, and his birth date is listed as that day. Virat Kohli’s age as of September 20, then, is 31 years and 10 months. He enrolled in his first cricket academy at the age of 10. Which served as a stepping stone for his cricket career as well as the lifestyle that Virat Kohli leads today.

Everyone is aware of Virat Kohli’s professional side. People tend to underestimate the amount of work he takes into living a healthy lifestyle and being his best self. Even though Virat Kohli’s way of life is extremely difficult to uphold, he nevertheless makes every effort to do so.

His practising sessions, diet, and exercise regimen. He invests all of this into being a cricket player. Virat Kohli is 31 years old according to his date of birth, however, he is much younger in terms of health.

He never strays from his diet. During a lockdown interview, he said that he only strayed from his diet once. That demonstrates how devoted he is to his hobby. Apart from this, Virat Kohli’s biography is notable for his commitment to living up to his words.

He was a staunch non-vegetarian at one point in his life. But once he began speaking out against animal abuse, he changed his diet to become a strict vegan.

At a time when everyone is becoming greedy, Virat Kohli is working hard to give back to society without impacting his job.

Virat Kohli’s net worth is reportedly estimated to be over $127 million by many sites. It equals about Rs. 950 crores in Indian rupees.

Kohli participated in his first Test in 2011. He was the first batsman to occupy the top slot in the ICC rankings for players in ODIs in 2013. He has twice received the Man of the Tournament award at the ICC World Twenty20 (in 2014 and 2016). He also holds the record for the fastest career overseas run total of 23,000 runs.

Virat married Anushka Sharma on December 11, 2017, after spending four years dating the Bollywood actress. After Virat and Anushka wed, their fans gave them the appellation “Virushka.”

The couple first got to know one another in 2013 while filming an advertisement for a shampoo company, and ever since then, their relationship has attracted a lot of media attention.

Virat, however, received media coverage for other relationships as well. There were several rumors that Virat had relationships with different girls.

Nevertheless, the majority of our cricket team’s cricketers are now particularly focused on fitness. Of course, the current captain of our Indian squad, Virat Kohli, deserves the most of the credit. The key reason for this is that Virat Kohli is a fitness enthusiast.

He will not let his physique be neglected in any way. His daily routine includes frequent exercise and adhering to a healthy diet. And when we look at him in this light, we can see how much he cares about his body.

The true nature of a guy is revealed by how he manages his finances and gives back to society in the best way possible for him. Virat Kohli, who is 25 years old and dedicated to advancing society, established his foundation at that time (VKF). There he assists young athletes from various backgrounds in developing their skills.

Everything they require is given to them by him, including professional counsel and housing. Their success in their chosen career is the only thing he asks of them. The VKF foundation’s official website has more information about it.

In addition to this, Virat Kohli hosted a charity event in London in 2017 while the Champions Trophy was being played. It was done to prevent human trafficking and to generate money for kids who have had the worst experiences of their lives.

In 2016, he also teamed up with VKF to support an old age home and assist the elderly. additionally pledged the house’s financial support for them in times of need.

Know all about cricket news and updates at CBTF news.

Get the fastest cricket news update at https://cbtfspeednews.com/.

Know all about cricket betting and updates at CBTF betting.

Get the updated expert betting tips at https://cricketbettingtipsfree.com/

Checkout our videos to get the latest updates about cricket and betting tips, and casino

tips to win big with expert opinions at https://www.cbtfmytube.com/.